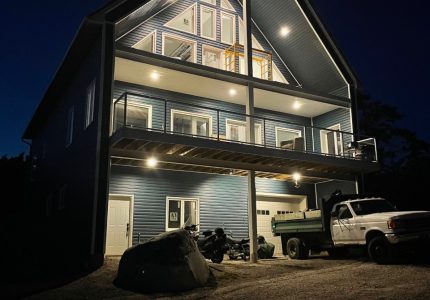 Remembrance Day is an important time of year to recognize many generations of Canadian Military veterans. We wanted to recognize a unique residential project built with Nudura ICF on the South Shore of Nova Scotia whose homeowner, Alain Blondin served over 20 years in the Canadian military. His tenure included serving in Afghanistan. Like many veterans, Alain’s time serving Canada took a toll on his health, exposing him to many high-stress situations, particularly during overseas missions.  Enter: his recovery project.

Alain decided to design his own home for himself and his wife, and have it built with Nudura ICF. He chose a product that would be able to endure the elements. The site is perched on the hillside, overlooking the Atlantic Ocean. “You can see the storms coming in, well before they hit land, from my top deck,” explains Alain.

The interior has a 10’ by 6’ bridge connection the mezzanine to the upper deck.

“The house features 8″ ICF walls and about 2800 SF of in-floor water heating pipes in the basement and main floor. There is a small 25000 BTU wood stove in the living room. The on-demand electric boilers for the central heating system were not yet installed during the 2020-2021 cold season, so that the only energy costs were from the wood. We burned only about four short cords over the whole season despite our Canadian winter. We didn’t have to pay for the wood, it came off our lot; if we had purchased the firewood, it would have cost about $1000.00 The house remained a comfortable 20 degrees Celsius throughout. The wood stove was not necessary on sunny days as the passive solar heat from the windows kept the house over 20 degrees during the day despite temperatures reaching minus 20 Celsius.”

Seeing the results of the home he designed is a life-long dream come true for Alain. “I’m very pleased. Nudura allowed this to happen,” says Alain with pride.

Overall, this build has been a success. We want to thank Alain for sharing his story. Thank you also to the many veterans who sacrificed to serve Canada.